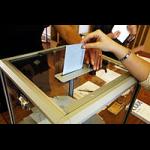 PBS
A
6h
Most Democrats don't want Biden to seek a 2nd term, poll says: While Biden has trumpeted his legislative victories and ability to govern ...
pbs.org/newshour/nation/most-democrats-dont-want-biden-to-seek-a-2nd-term-poll-says

Atiku Abubakar, one of Nigeria’s leading opposition candidates, talks to the BBC's AzeezatOlaoluwa about key issues ahead of the upcoming presidential ... Show more

The Punch
C-
11h
I will reduce cost of governance if elected –Obi
punchng.com/i-will-reduce-cost-of-governance-if-elected-obi/

Associated Press
A
15h
Biden 2024? Most Democrats say no thank you: AP-NORC poll: WASHINGTON (AP) — A majority of Democrats now think one term is plenty for President Joe Biden ...
apnews.com/article/ap-norc-poll-biden-2024-presidential-prospects-c843c5af6775b4c8a0cff8e2b1db03f6

The Washington Post
B
10h
Biden’s economic success may reset the 2024 race: A still-humming economy puts Biden in the driver's seat for reelection.
washingtonpost.com/opinions/2023/02/06/biden-economic-success-2024/

The Hill (newspaper)
B
Feb 04
Eight Republicans who could challenge Trump in 2024: The possibility of a crowded GOP presidential primary in 2024 has grown likelier in recent days following ...
thehill.com/homenews/campaign/3842885-eight-republicans-who-could-challenge-trump-in-2024/

Newsroom (website)
C-
Feb 02
Wayne's reign not right as rain: Some are speculating whether the Auckland Mayor's leadership is circling the drain. James Elliott hopes they're ...
newsroom.co.nz/page/yesterdaze-waynes-reign-not-right-as-rain

The Hill (newspaper)
B
Feb 03
Jobs report gives Biden pre-State of the Union boost: A stronger-than-expected jobs report has put the wind at President Biden’s back ahead of his State of the ...
thehill.com/homenews/administration/3842718-jobs-report-gives-biden-pre-state-of-the-union-boost/

inews.co.uk
B-
Feb 04
“We could go into the biggest local elections since 2019 not even fielding a full slate of candidates,” said an ex-Cabinet minister Read more here ➡️ inews.co.uk/news/politics/tories-struggling-recruit-may-local-elections-2127684
0 similar articles
11 24

The Hill (newspaper)
B
Feb 05
For Trump, one step forward, two steps back: Bottom line: Trump is looking rather swampy these days.
thehill.com/opinion/campaign/3844271-for-trump-one-step-forward-two-steps-back/

Associated Press
A
Feb 04
Dems decide to shake up start of 2024 presidential primary: PHILADELPHIA (AP) — The Democratic Party on Saturday approved the reordering of its 2024 presidential ...
apnews.com/article/politics-georgia-2022-midterm-elections-south-carolina-83f6ea9bd64e567bb1ed55d734474b89

Last week, protests had begun to break out in some parts of the country as video clips emerged on social media of people getting very desperate ... Show more

The Washington Post
B
Feb 05
Koch network to oppose Trump in primary after sitting out recent cycles: The return of one of the biggest spenders in U.S. politics to the presidential primary ...
washingtonpost.com/politics/2023/02/05/koch-trump-2024-gop-presidential-primary/

Newsweek
C+
Feb 02
Donald Trump's Support Among Republicans Falls to Lowest Point Ever: A new survey of GOP primary voters shows a majority would like a different presidential ...
newsweek.com/donald-trump-support-republican-voters-lowest-poll-1778194

The National (Scotland)
B-
Feb 05
Gender Recognition Reform Bill was not the big distraction claimed: AS a senior citizen I probably share the concern and unease that the Gender Recognition ...
thenational.scot/politics/23300767.gender-recognition-reform-bill-not-big-distraction-claimed/

"The fact that he is doing 70 per cent in Anambra State does not mean somebody doing 10 per cent in Kano is not better than him. Kano is four million votes ... Show more

The Hessian SPD wants to officially nominate Federal Interior Minister Nancy Faeser as the top candidate for the state elections this afternoon. On Thursday ... Show more

The Washington Post
B
Feb 03
Post Politics Now: Biden, Harris heading to Philadelphia with an eye on 2024: Ahead of appearances at a Democratic National Committee gathering ...
washingtonpost.com/politics/2023/02/03/biden-harris-philadelphia-dnc-water-infrastructure/

Located in Fort Lauderdale, the French-style homes have their own pools and over 14,000 square feet of living space.

Two Florida Mansions Built for Identical Twins List for $54 Million: Located in Fort Lauderdale, the two French country-style homes have their own pools, over 14 ...
robbreport.com/shelter/homes-for-sale/florida-mansions-for-twins-land-on-market-1234735455/

The Hill (newspaper)
B
Feb 03
Victoria Spartz passes on Senate run, to retire from Congress at end of term: Rep. Victoria Spartz (R-Ind.) on Friday announced she will not run for Congress in ...
thehill.com/homenews/house/3842834-victoria-spartz-passes-on-senate-run-to-retire-from-congress-at-end-of-term/

The Hill (newspaper)
B
Feb 05
Kemp’s political clout grows ahead of 2024: Republicans are increasingly looking to Georgia Gov. Brian Kemp (R) to play a leading role in the party’s bid to take ...
thehill.com/homenews/campaign/3842978-kemps-political-clout-grows-ahead-of-2024/

expats.cz Jan 28
Petr Pavel elected President of the Czech Republic: The votes are in, and the retired NATO general has defeated opponent Andrej Babiš to become the Czech ...
expats.cz/czech-news/article/petr-pavel-elected-president-of-the-czech-republic

The Washington Post
B
Feb 03
Nikki Haley, Tim Scott and more to blitz Iowa, S. Carolina in 2024 ‘preseason’: While the Republican primary is still ramping up slowly, Nikki Haley ...
washingtonpost.com/politics/2023/02/03/gop-2024-election-candidates-nikki-haley-donald-trump-ron-desantis/

The head of Malawi's Anti-Corruption Bureau has been suspended over leaked audio in which she made comments that could potentially prejudice people ... Show more

ABC News
B+
Feb 02
The external campaign grows for a DeSantis 2024 bid : Although the Florida governor has stayed quiet on 2024, his supporters have not.
abcnews.go.com/Politics/external-campaign-grows-desantis-2024-bid/story

The Hill (newspaper)
B
Feb 02
Trump won’t commit to endorsing eventual 2024 GOP nominee: Former President Trump on Thursday would not commit to endorsing the eventual Republican nominee for ...
thehill.com/homenews/campaign/3841146-trump-wont-commit-to-endorsing-eventual-2024-gop-nominee/

The Punch
C-
Feb 02
IPOB suspends sit-at-home for elections: The Indigenous People of Biafra has suspended its weekly sit-at-home order for the 2023 general elections.
punchng.com/ipob-suspends-sit-at-home-for-elections/

HAPPENING NOW: The Defense Department holds a press briefing from the Pentagon. https://abcn.ws/2J0gebC

The Guardian
C+
Feb 01
Judge who told Pence not to overturn election predicts ‘beginning of end of Trump’
theguardian.com/us-news/2023/jan/31/trump-beginning-end-judge-predicts

CNN.com
C-
Feb 01
Harris mourns Tyre Nichols at funeral and calls for police reform: He ‘should have been safe’
cnn.com/2023/02/01/politics/kamala-harris-tyre-nichols-funeral/

The Sydney Morning Herald
B+
Feb 01
Dutton is driving the Liberals off a cliff - and his colleagues are passengers watching on
smh.com.au/national/dutton-is-driving-the-liberals-off-a-cliff-and-his-colleagues-are-passengers-watching-on-20230131-p5cgpw.html

Mail & Guardian
B-
Jan 29
Ramaphosa cracks the whip, calls for action and urgency in dealing with Eskom crisis
mg.co.za/article/2023-01-29-ramaphosa-cracks-the-whip-calls-for-action-and-urgency-in-dealing-with-eskom-crisis/

“So, I can guess – I was not there – that in obtaining the approval, I believe the CBN deceived the president by amplifying the need to have corruption-free ... Show more

The Punch
C-
Feb 03
Why Obi must win 2023 election —Adebanjo: The leader of the pan Yoruba socio-political group, Afenifere, Ayo Adebanjo, has explained why the presidential ...
punchng.com/why-obi-must-win-2023-election-adebanjo/

The Guardian
C+
Feb 02
The Tories now face a choice: lose office with honour or burn everything in sight
theguardian.com/commentisfree/2023/feb/02/tories-lose-opposition-party

The Hill (newspaper)
B
Jan 29
Does it matter if Trump believes he won the 2020 election?: Either Trump knew he lost the election and deceived millions of Americans with a “Big Lie” or he ...
thehill.com/opinion/white-house/3835058-does-it-matter-if-trump-believes-he-won-the-2020-election/

Foreign Affairs
B+
Feb 03
Turkey’s Turning Point: For Erdogan, everything is now riding on Turkey’s elections. Given how much is at stake, he is likely to employ almost any means to avoid ...
foreignaffairs.com/turkey/turkeys-turning-point-erdogan