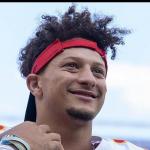 The Cincinnati Enquirer
A-
Jan 30

Burrow: “Every loss, you learn from." https://bit.ly/3WQhTSa?utm_medium=social&utm_source=facebook_Enquirer_-_Cincinnati_and_Kentucky

Honor the past, work hard in the present, and leave a legacy for the future.

In his playoff career, Patrick Mahomes has

BillSimmons Jan 30
You can’t call the late hit on Mahomes after you ignored the late hit on Burrow a few mins earlier. Those refs were horrible ... Show more
0 similar articles
3.3k 1.8k

CBS Sports
C-
Feb 02
As the favorite to win MVP, Patrick Mahomes has a chance to do what hasn't been done in 2+ decades.
7 similar articles
493 74

CBS Sports
C-
Jan 31
Patrick Mahomes’ playoff resume at 27 years old might be even better than some realize.

Sports Illustrated
C-
Jan 31
Joe Burrow Shares Super Bowl Message for Patrick Mahomes (Video): Cameras caught what the two said to each other on the field after the AFC championship game.
si.com/nfl/2023/01/31/joe-burrow-super-bowl-patrick-mahomes-afc-championship

From The Athletic : Doug Williams, in 1988, became the first Black quarterback to start and win a Super Bowl. He's happy two others will soon share the ... Show more

CNN.com
C-
Jan 31
Why the Super Bowl is ‘a big moment for a lot of Black, young quarterbacks coming up’
cnn.com/2023/01/31/sport/super-bowl-black-quarterbacks-doug-williams-spt-intl/

Patrick Mahomes has pretty much DOMINATED the NFL, minus Joe Burrow and the Bengals. 👀

CBS Sports
C-
Feb 02
Super Bowl LVII: Chiefs' Patrick Mahomes a win away from having one of NFL's best five-year stretches ever
cbssports.com/nfl/news/super-bowl-lvii-chiefs-patrick-mahomes-a-win-away-from-having-one-of-nfls-best-five-year-stretches-ever/

FOX Sports
C-
Jan 21
Patrick Mahomes is staying in the game after going down on the previous play. He appeared to have his leg rolled up while being tackled in the pocket.
73 similar articles
6k 1k

CBS Sports
C-
Feb 02
Super Bowl 2023: Patrick Mahomes will be trying to end this 56-year quarterback curse that even got Tom Brady
cbssports.com/nfl/news/super-bowl-2023-patrick-mahomes-will-be-trying-to-end-this-56-year-quarterback-curse-that-even-got-tom-brady/

Is Mahomes already a first ballot Hall of Famer? 🤔

Yardbarker
C-
Feb 02
Patrick Mahomes responds to accusations of flopping for key penalty: The unnecessary roughness penalty that put the Kansas City Chiefs in position to kick a ...
yardbarker.com/nfl/articles/patrick_mahomes_responds_to_accusations_of_flopping_for_key_penalty/s1_127_38424360

The Ringer
B
Jan 30
Patrick Mahomes and the Chiefs are Super Bowl bound AGAIN.
119 34

Marquez Valdes-Scantling was there when Patrick Mahomes needed him. 💪

Sports Illustrated
C-
Jan 28
Jags’ Arden Key Fined for Hit on Chad Henne, But Not Patrick Mahomes: The Chiefs starting quarterback found himself hampered after the low hit and now may be ...
si.com/nfl/2023/01/28/jaguars-arden-key-fined-hit-chad-henne-not-patrick-mahomes-ankle-sprain

On this day, Patrick Mahomes made one of his greatest playoff moments in the 2019 AFC Championship. 😤

Patrick Mahomes has gone to the locker room. Chad Henne is now in at QB.

FOX Sports
C-
Jan 30
“We can put to bed the notion that Joe Burrow is better than Patrick Mahomes, it shouldn’t have been a debate.” — Shannon Sharpe

The Cincinnati Enquirer
A-
Jan 24

It's hard to imagine Patrick Mahomes and Chiefs head coach Andy Reid won’t be extra motivated to beat the Bengals knowing how the last three games have ... Show more

Patrick Mahomes carrying the Chiefs to their 5th straight AFC Championship like...

The Philadelphia Inquirer
B-
Jan 31
Andy Reid, Travis Kelce, and the Chiefs’ comments on playing the Eagles in the Super Bowl
inquirer.com/eagles/chiefs-eagles-super-bowl-andy-reid-travis-kelce-patrick-mahomes-20230130.html

Patrick Mahomes is on ANOTHER level when playing in the Conference Championship game. 🤯

Sports Illustrated
C-
Jan 25
Patrick Mahomes Headlines Five Finalists for NFL MVP Award: One of the finalists is not a quarterback.
si.com/nfl/2023/01/25/finalists-nfl-mvp-award

CNN.com
C-
Jan 27
Quarterbacks in the NFL playoffs are getting younger. Here’s why their age is important
cnn.com/2023/01/27/sport/quarterbacks-younger-playoffs-nfl-spt-intl/

The Wall Street Journal
B
Jan 20
The Patrick Mahomes Generation Has Finally Conquered the NFL: Tom Brady and Aaron Rodgers declined this season. All eight quarterbacks left in the playoffs are ...
wsj.com/articles/nfl-playoffs-tom-brady-patrick-mahomes-aaron-rodgers-11674186290

Patrick Mahomes and the Chiefs come right back! 10-POINT GAME.

#JAXvsKC on NBC and Peacock.

Sports Illustrated
C-
Jan 22
Chiefs’ Patrick Mahomes Diagnosed With High Ankle Sprain, per Report: The quarterback’s status for the upcoming AFC championship game will be the talk of the NFL ...
si.com/nfl/2023/01/22/chiefs-quarterback-patrick-mahomes-diagnosed-high-ankle-sprain-injury-status-report

Ages of Remaining QBs In Playoffs

331 yards & 4 TD passes in Week 10. Can Patrick Mahomes do it again vs. Jacksonville? #NFLPlayoffs

USA Today
B
Jan 31
A look inside the last-minute mistakes that cost Bengals the AFC title: "I've got to learn from experience," DE Joseph Ossai said about his costly penalty in the ...
eu.usatoday.com/story/sports/nfl/bengals/2023/01/30/cincinnati-bengals-late-mistakes-cost-them-dearly-afc-title-game/11147975002/