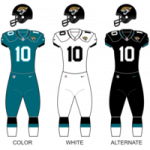 Saturdays are for Trevor Lawrence 😂

Trevor Lawrence finally met his match on a Saturday

The Jaguars are here and they mean business. 😤

Either the Jaguars or Chiefs have played in every AFC Championship Game since the 2017 season.

No one is having more fun than Josh Allen.

Now, they have a shot at the AFC Championship Game with a win against the Chiefs.

Sports Illustrated
C-
Jan 31
Urban Meyer Says He Has ’No Desire’ to Return to Coaching: He was also asked if he would have done anything differently while coaching the Jaguars.
si.com/nfl/2023/01/31/urban-meyer-no-desire-return-to-coaching

Sports Illustrated
C-
Jan 22
Trevor Lawrence Shares Promising Message After Jaguars’ Loss to Chiefs: The Jags quarterback shared a message of optimism after his team was eliminated by Kansas ...
si.com/nfl/2023/01/22/trevor-lawrence-shares-promising-message-after-jaguars-loss-to-chiefs

The Jacksonville Jaguars have been eliminated from the NFL Playoffs.

The #Bengals shut down Josh Allen and the #Bills .

Can The Kansas City Chiefs make it 5 straight trips to the AFC Championship game or will the Jacksonville Jaguars play spoiler?

The Jacksonville Jaguars are lurking in the 4th quarter... Can they mount another crazy comeback? 👀

The Kansas City Star
B+
Jan 22
The Chiefs are heading to the AFC Championship.Kansas City triumphed over the Jacksonville Jaguars at Arrowhead, 27-20. #Chiefs #ChiefsKingdom #NFLPlayoffs #JAXvsKC
1 similar article
47 5

The Divisional Round starts TODAY on NBC and Peacock!

CBS Sports
C-
Jan 26
Hackett, who's had successful runs as an offensive coordinator for the Jaguars and Packers, will get another shot with the New York Jets .
1 similar article
112 35

USA Today
B
Jan 31
Urban Meyer has 'no desire' to return to coaching after flame out with Jacksonville Jaguars
eu.usatoday.com/story/sports/nfl/jaguars/2023/01/31/former-jaguars-coach-urban-meyer-has-no-desire-return-sideline/11154220002/

The Washington Post
B
Feb 01
Bobby Beathard, Hall of Fame football executive, dies at 86: He secured his legacy as Washington’s general manager in the 1980s, luring little-known NFL ...
washingtonpost.com/obituaries/2023/02/01/bobby-beathard-washington-general-manager-dead/

Deadspin
D
Jan 20
Maybe Byron Leftwich shoulda took that Jacksonville Jaguars' job: Head coaching gigs are hard to come by, and Leftwich is now out of a job after Tampa firing
deadspin.com/byron-leftwich-tampa-bay-bucs-tom-brady-jaguars-coach-1850011123

Trevor Lawrence's reaction to the game-winning field goal is what the #NFLPlayoffs are all about. (via NFL Films )

Sports Illustrated
C-
Jan 21
Potential Snow in Forecast for Chiefs vs. Jaguars Saturday Evening: The weather could come into play during the AFC divisional round matchup.
si.com/nfl/2023/01/21/kansas-city-chiefs-jacksonville-jaguars-snow-forecast

The Kansas City Star
B+
Jan 20
Chiefs beat Jaguars once this season. Here’s how they can again (with higher stakes)
kansascity.com/sports/nfl/kansas-city-chiefs/article271318367.html

Deadspin
D
Jan 22
Daniel Jones is a long road to nowhere: Danny Dimes is not the Giants’ quarterback of the future
deadspin.com/daniel-jones-giants-eagles-playoffs-1850016751

Sports Illustrated
C-
Jan 17
Al Michaels Responds to Criticism of His Chargers-Jaguars Broadcast: The longtime play-by-play broadcaster was the target of ridicule for his lack of energy at ...
si.com/media/2023/01/17/al-michaels-criticism-chargers-jaguars-nbc-broadcast

The Jaguars answer RIGHT BACK! #DUUUVAL

#JAXvsKC on NBC and Peacock TV .

Ages of Remaining QBs In Playoffs

Chris Simms ranked the receiving corps of each team still in the playoffs. Thoughts?! 👀

The Kansas City Star
B+
Jan 19
Chiefs rookie has extra motivation for playoffs: To get first career postseason win
kansascity.com/sports/nfl/kansas-city-chiefs/article271332572.html

CBS Sports
C-
Jan 24
What we learned from the divisional round: Dak Prescott comes up small; Bengals O-line sets up run game
cbssports.com/nfl/news/what-we-learned-from-the-divisional-round-dak-prescott-comes-up-small-bengals-o-line-sets-up-run-game/

We NEED to find out who said this to Trevor Lawrence on the sideline. 🤣

Associated Press
A
Jan 18
No Brady or Rodgers, no problem for NFL in divisional round: For the first time in 13 years, neither Tom Brady nor Aaron Rodgers reached the divisional round of ...
apnews.com/article/tom-brady-kansas-city-chiefs-jacksonville-jaguars-joe-burrow-los-angeles-chargers-8a3e9ddcf8d3a1931de163715182ba15

The Advocate
A-
45m
Southern women look to bounce back from close Jackson State loss: As the Southern women’s basketball team got ready for Saturday’s game at Alabama A&M ...
theadvocate.com/baton_rouge/sports/southern/southern-women-look-to-bounce-back-from-close-jackson-state-loss/article_d33099c6-a43f-11ed-b056-eb25bc886793.html

Josh Allen just couldn't get it going today vs. the Bengals . 😬

Sports Illustrated
C-
Jan 26
Trevor Lawrence Vows Jaguars’ Rise, Success Is Only Beginning: It was his first Instagram post since their 27–20 divisional-round loss to the Chiefs.
si.com/nfl/2023/01/26/trevor-lawrence-jaguars-2023-season-instagram

Yahoo
B
Jan 20
Trevor Lawrence doesn't think Chiefs fans at Arrowhead Stadium will be 'much louder' than Jaguars fans
sports.yahoo.com/trevor-lawrence-doesnt-think-chiefs-fans-at-arrowhead-stadium-will-be-much-louder-than-jaguars-fans-194330579.html

Divisional Round game times are set 🚨

Deadspin
D
Jan 20
It would be cool if some of the Jacksonville Jaguars kneeled in protest of Ron DeSantis’ recent actions
deadspin.com/jacksonville-jaguars-ron-desantis-chiefs-nfl-kneeling-1850011684

Will the Jaguars' wizardry follow through against the Chiefs? 🪄

SBNation.com
C-
Jan 24
A Chiefs fan eating a baked potato is the viral star of the NFL playoffs so far: The Uno reverse card was played to perfection here
sbnation.com/nfl/2023/1/24/23568188/chiefs-fan-baked-potato-nfl-playoffs-tweets-jags

Of course Josh Allen and Stefon Diggs have a special handshake. 😅🤝

Inc.com
C-
Jan 23
After a Season-Ending Loss, This NFL Quarterback Taught an Amazing Lesson in Leadership. It Took Him Only 60 Seconds
inc.com/justin-bariso/how-to-be-a-good-leader-emotional-intelligence-trevor-lawrence.html