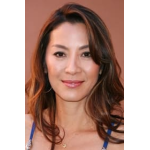 She is #EverythingEverywhereAllAtOnce , one of the world’s biggest stars, and has made #Oscar history - congratulations to Michelle Yeoh!

Michelle is one of our five #GoldenTomato ... Show more

The Hollywood Reporter
B+
Jan 24
Michelle Yeoh Becomes First Asian Best Actress Oscar Nominee: It took 95 years, but Michelle Yeoh is now the first person who identifies as Asian to be nominated ...
hollywoodreporter.com/movies/movie-news/michelle-yeoh-first-asian-actress-oscar-nominee-2023-1235308034/

The Guardian
C+
Jan 24
Oscars 2023: Everything Everywhere All at Once leads nominations : Multiverse action epic dominates shortlist, while All Quiet on the Western Front and The ...
theguardian.com/film/2023/jan/24/oscars-2023-nominations-everything-everywhere-all-at-once

Evening Standard
B-
13h
Michelle Yeoh says ‘nobody was getting me off that stage’ at Golden Globes: Organisers attempted to cut short her acceptance speech by playing exit music
standard.co.uk/showbiz/michelle-yeoh-says-nobody-was-getting-me-off-that-stage-at-golden-globes-b1057746.html

The Star (Malaysia)
D
Jan 31
Disheartening that Malaysian Muslims have to defend their religion in their own country
thestar.com.my/opinion/letters/2023/01/31/disheartening-that-malaysian-muslims-have-to-defend-their-religion-in-their-own-country

Axios (website)
B+
Jan 25
Michelle Yeoh, Stephanie Hsu make 2023 Oscars history: For the first time in its nearly 100-year history, an Asian-identifying performer has been nominated for ...
axios.com/2023/01/24/michelle-yeoh-oscar-nominations-2023

Süddeutsche Zeitung
A-
Jan 23
Everything, Everywhere All at Once Streaming: Kung-fu with Sex Toys: Crazy multiverse strip with an Asian heroine? Hollywood didn't plan "Everything ...
sueddeutsche.de/kultur/everything-everywhere-all-at-once-ueberraschungserfolg-bericht-1.5735354

The New York Times
A-
Jan 24
If she wins, Michelle Yeoh would become the first Asian woman to win a lead actress Oscar. Yeoh was born in Malaysia and was a star in Asia before crossing ... Show more
0 similar articles
655 1k 1.7k

The Straits Times
B
Jan 21
Making it in Hollywood: Michelle Yeoh and Ke Huy Quan on why they didn’t give up on their dream
straitstimes.com/life/entertainment/awards-season-front-runners-michelle-yeoh-ke-huy-quan-why-we-didn-t-give-up-on-our-hollywood-dream

“We only claim talented Malaysians when they leave and make a name of themselves outside." Read more: https://sc.mp/1d567b

Rotten Tomatoes Jan 30
Golden Year Award 2022: The Golden Year Award to honor those people who created and worked on some of the best movies and TV shows and otherwise impacted the ...
editorial.rottentomatoes.com/guide/golden-year-award-2022/

MovieWeb
C-
Jan 25
Jamie Lee Curtis Reacts to Her First Ever Oscar Nomination: 'I Am Stunned and Humbled'
movieweb.com/jamie-lee-curtis-reacts-to-her-first-ever-oscar-nomination/

Evening Standard
B-
Jan 26
Michelle Yeoh: All her best films to watch before the Oscars: Yeoh’s career spans a massive four decades
standard.co.uk/culture/film/michelle-yeoh-best-films-oscars-crouching-tiger-everything-everywhere-all-at-once-crazy-rich-asians-b1055610.html

The Daily Beast
E
Jan 25
Michelle Yeoh’s Infinite Wisdom: ‘Our Life Is in Our Hands’: The “Everything Everywhere All at Once” star is relishing the meatiest role of her career ...
thedailybeast.com/michelle-yeohs-infinite-wisdom-our-life-is-in-our-hands

Reuters
A+
Jan 16
Stars, including Michelle Yeoh and Cate Blanchett posed on the red carpet at the Critics Choice awards in Los Angeles

GQ
C-
Jan 29
Crazy Rich Asians’ Michelle Yeoh Has Kicked Ass for Three Decades: The Malaysian star has had a prolific and exceptional career by being one of the most ...
gq.com/story/michelle-yeoh-has-kicked-ass-for-three-decades

Happy #LunarNewYear from our #DisneyPlus fam to you. 🧧✨

The Atlantic
B-
Jan 19
The Speeches That Saved the Golden Globes: If the show succeeded, it was thanks to the likes of Michelle Yeoh, Jennifer Coolidge, and Ke Huy Quan.
theatlantic.com/culture/archive/2023/01/golden-globes-return-speeches/672700/

MovieWeb
C-
Jan 16
Everything Everywhere All at Once Wins Best Picture at Critics' Choice Awards
movieweb.com/everything-everywhere-all-at-once-wins-best-picture-at-critics-choice-awards/

The Star (Malaysia)
D
Jan 20
HK actor Donnie Yen is proud of Michelle Yeoh's win: 'This is long overdue': The action star was in Kuala Lumpur recently to promote his latest movie ...
thestar.com.my/lifestyle/entertainment/2023/01/20/hk-actor-donnie-yen-is-proud-of-michelle-yeoh039s-win-039this-is-long-overdue039

HuffPost
D-
Jan 20
Bafta 2023: Here Are All The Nominations Ahead Of This Year's Awards Show: All Quiet On The Western Front and Everything Everywhere All At Once are among the top ...
huffingtonpost.co.uk/entry/baftas-2023-nominations-list-films_uk_63c93777e4b0c8e3fc753a00

We Got This Covered Jan 15
‘Babylon’ Star Margot Robbie Is Pretty in Pink at the 2022 Golden Globes: Robbie has channeled 'Barbie' on the red carpet.
wegotthiscovered.com/celebrities/babylon-star-margot-robbie-is-pretty-in-pink-at-the-2022-golden-globes/

BuzzFeed
C-
Jan 13
It Was A Big Week For Asian Diaspora Media: Michelle Yeoh getting her flowers, the Single's Inferno finale, Blackpink at Coachella — a trifecta of greatness.
buzzfeednews.com/article/stefficao/michelle-yeoh-ke-huy-quan-blackpink-singles-inferno

The Straits Times
B
Jan 10
Michelle Yeoh is first Asian to win Best Actress at the National Board of Review Awards
straitstimes.com/life/entertainment/michelle-yeoh-is-first-asian-to-win-best-actress-at-the-national-board-of-review-awards

CNN.com
C-
Jan 11
Michelle Yeoh would not be played off during Golden Globes acceptance speech: Michelle Yeoh won best performance by an actress in a musical or comedy motion ...
cnn.com/2023/01/10/entertainment/michelle-yeoh-best-actress-win-golden-globes/

Michelle Yeoh won the award for best actress in a musical or comedy for her role in Everything Everywhere All at Once at the Golden Globe Awards ... Show more

Reuters
A+
Jan 09
Michelle Yeoh makes history at the National Board of Review Awards in New York by being the first Asian actress to win a best acting honor from the ... Show more

Malaysiakini
C+
Jan 14
Filmmaker: M'sia can’t claim award-winning Michelle Yeoh its own: 'She owes nothing to the arts policy of this country.'
malaysiakini.com/news/651530

Malaysian actress of Chinese descent Michelle Yeoh won a Golden Globe award for best actress in a musical or comedy film for her role in Everything ... Show more

inews.co.uk
B-
Jan 12
The Golden Globe winners are a reminder that as well as having all sorts of stories to tell, women in their 60s are complex ... Show more
0 similar articles
20 1

Time
B
Jan 11
Everything Everywhere All At Once May Be Too Trippy for Its Own Good—But Michelle Yeoh Still Dazzles
time.com/6164962/everything-everywhere-all-at-once-review/

ctvnews.ca
A-
Jan 11
At rehabbed Golden Globes, Yeoh, Spielberg and 'White Lotus' win: The Golden Globes returned to the air Tuesday with a red carpet flush with celebrities ...
ctvnews.ca/entertainment/at-rehabbed-golden-globes-yeoh-spielberg-and-white-lotus-win-1.6224312

Los Angeles Times
B+
Jan 14
AFI Fest 2023 Awards with everyone, from everything, all at once: Michelle Yeoh, Ke Huy Quan, Bob Odenkirk and more chop it up at the AFI Fest 2023 Awards
latimes.com/entertainment-arts/story/2023-01-13/afi-fest-2023-photo-gallery

The Globe and Mail
A-
Jan 13
We can’t let online harassment push women out of public spaces : A new Canadian film shows how nasty comments are attempts to keep women out of professional ...
theglobeandmail.com/opinion/article-we-cant-let-online-harassment-push-women-out-of-public-spaces/

Malaysiakini
C+
Jan 15
COMMENT | Did Michelle Yeoh take a Malaysian road to the Oscars?: Is Yeoh really a product of Malaysia?
malaysiakini.com/columns/651635

A journey that spans generations and transcends genres.

Time
B
Dec 29 22
“When you get an opportunity like this, you have to pour your heart and soul into it, because you don’t know when the next chance is ... Show more
0 similar articles
680 15

Michelle Yeoh gave an emotional speech after winning her first Golden Globe for Best Actress in a Motion Picture – Musical or Comedy.

We Got This Covered Jan 11
Fans Are Obsessed With Michelle Yeoh Threatening To Beat Up the Producers of the Golden Globes
wegotthiscovered.com/movies/fans-are-obsessed-with-michelle-yeoh-threatening-to-beat-up-the-producers-of-the-golden-globes/

Michelle Yeoh stars in an action-packed clip from the first episode of The Witcher: Blood Origin.

South China Morning Post
C+
Dec 23 22
Michelle Yeoh to Jackie Chan on Everything Everywhere role: Your loss, bro: The Everything Everywhere All at Once star talks about finally feeling cool to the ...
scmp.com/lifestyle/entertainment/article/3203377/michelle-yeoh-role-jackie-chan-turned-down-everything-everywhere-all-once-and-how-its-finally-made